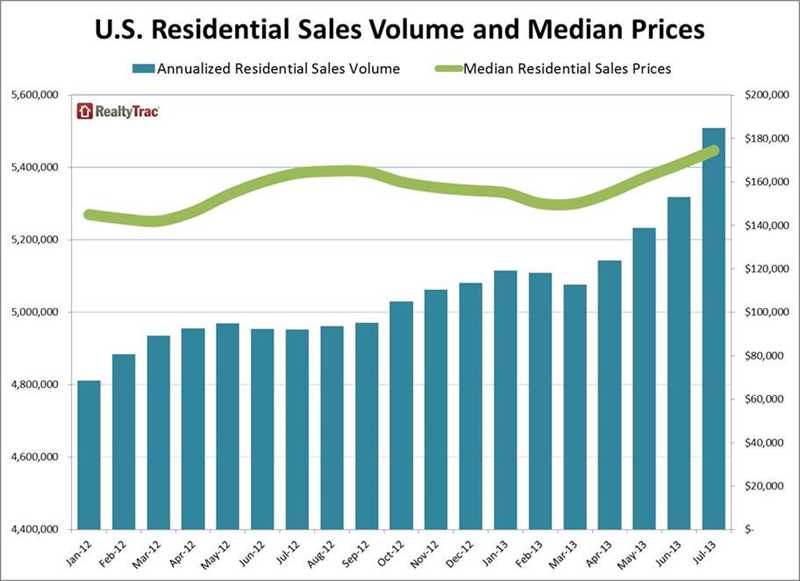 RealtyTrac today released its July 2013 U.S. Residential & Foreclosure Sales Report, which shows that U.S. residential properties sold at an estimated annualized pace of 5.5 million in July 2013, up 4 percent from the previous month and up 11 percent from a year ago — the biggest annual increase in sales volume so far this year.

In the Chicago-Naperville-Joliet Metro area prices rose 10% year-over-year, sales volume was up 27% and cash purchases accounted for a stunning 44% of all transactions.

“Low inventory of homes available for sale is proving to be a double-edged sword in many local housing markets that have bounced back quickly from the real estate slump,” said Daren Blomquist, vice president at RealtyTrac. “Home prices are accelerating rapidly in these markets thanks to the combination of low supply and strong demand. However, counter to the national trend, sales volume in these markets is down even as the percentage of cash sales rises, indicating there is still strong demand but that buyers who need financing to purchase are increasingly left out in the cold.

“The recent uptick in interest rates could also be contributing to a higher percentage of cash purchases as some non-cash buyers can no longer afford to buy, particularly in high-priced markets,” Blomquist added.

Institutional investor purchases (sales to non-lending entities that purchased at least 10 properties in the last 12 months) accounted for 9 percent of all residential sales in July, the same percentage as in the previous month and also the same percentage as in July 2012. Metro areas with the highest percentage of institutional investor purchases included Atlanta (25 percent), Tampa (22 percent), Palm Bay, Fla., (20 percent), Greenville, S.C. (19 percent), and Charlotte, N.C. (19 percent).

Sales of bank-owned properties (REO) accounted for 9 percent of all residential sales in July, also the same percentage as the previous month and a year ago. Metro areas with the highest percentages of REO sales included Detroit (26 percent), Modesto, Calif. (25 percent), Stockton, Calif., (24 percent), Las Vegas (24 percent), and Cleveland (20 percent).

Among 20 of the nation’s largest metro areas with annual sales estimates tracked in the report, the biggest year-over-year decreases in sales volume were in San Francisco (down 20 percent), Los Angeles (down 20 percent), San Diego (down 19 percent), Riverside-San Bernardino (down 14 percent), Phoenix (down 13 percent), and Atlanta (down 8 percent).

Among 20 of the nation’s largest metro areas with annual sales estimates tracked in the report, the biggest year-over-year increases in sales volume were in Chicago (up 27 percent), Minneapolis (up 23 percent), Baltimore (up 21 percent), Boston (up 20 percent), and Philadelphia (up 20 percent).

Major metro areas where median residential property prices increased 20 percent or more from a year ago in July included Los Angeles (up 29 percent), Atlanta (up 24 percent), San Francisco (up 35 percent), Riverside-San Bernardino (up 26 percent), and Phoenix (up 25 percent).