H3177 condos in Lake View to kick off sales in March 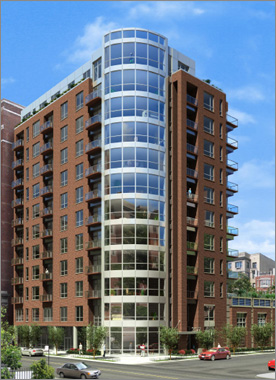 In a rare example of new construction in Chicago’s Lake View neighborhood, developers George Bahramis and Steve Lome plan to build a 12-story mid-rise at the southeast corner of Belmont and Hudson, where a three-story apartment building currently stands.

A sales center for the project, called H3177, will open March 1 on-site at 3177 N. Hudson Ave. After the groundbreaking, which is scheduled for the end of June, the sales center will move off-site briefly, says Sam Jenkins, a sales associate with Century 21 Sussex & Reilly, which is marketing the project. Deliveries are expected in late 2008 or early 2009. All of H3177’s 56 units were available when we talked to Jenkins last week.

The original design for H3177 had a strong modern influence. Architects Jim Plunkard and Ryan Doody of Hartshorne Plunkard Architecture rounded the building’s corner and created an open public plaza to give the site a more open feel.

After about a year of negotiations between Ald. Tom Tunney (44th), neighborhood groups, the architects and developers George Bahramis and Steve Lome of Belmont-Hudson Development, Inc., Plunkard and Doody updated the design with a red brick exterior to make the building blend in with the older surrounding structures.

But the rounded corner remained, a glass-and-steel cylinder running the length of the building’s northwest edge. This feature endows unit interiors with a curving wall of floor-to-ceiling windows. With the exception of one four-bedroom penthouse, the building’s corner units are 1,435 square feet, with three bedrooms and two bathrooms.

“It’s kind of a nice combination of the old and the new,” says architect Ray Hartshorne. “That’s something that we’re not afraid of doing. We like the contrast between vintage Chicago buildings and contemporary architecture.”

Only about a dozen of the building’s 56 homes have rounded walls. The remaining units, most of which have one or two bedrooms, come in a variety of layouts with floor-to-ceiling windows, 10-foot ceiling heights, stainless-steel Viking appliances and Grohe faucets. Living areas will have hardwood floors and bedrooms will have carpeting with hardwood flooring available as an upgrade.

All of the units have private outdoor space — balconies for most of the condos (corner units have two each) and decks for the penthouses. Common areas include a 1,200-square-foot all-purpose room and a landscaped outdoor area on the third floor, over the garage, says Jenkins. The lobby will have a security system but no door staff — an effort to keep monthly assessments low (Jenkins says they will be in the $200s).

Prices range from the $350s to the $800s, with penthouses in the $1.5 million range. One space in an indoor heated parking garage is included in the price, with the option to buy an additional space.