Ridding oneself entirely of the coal and servant problems 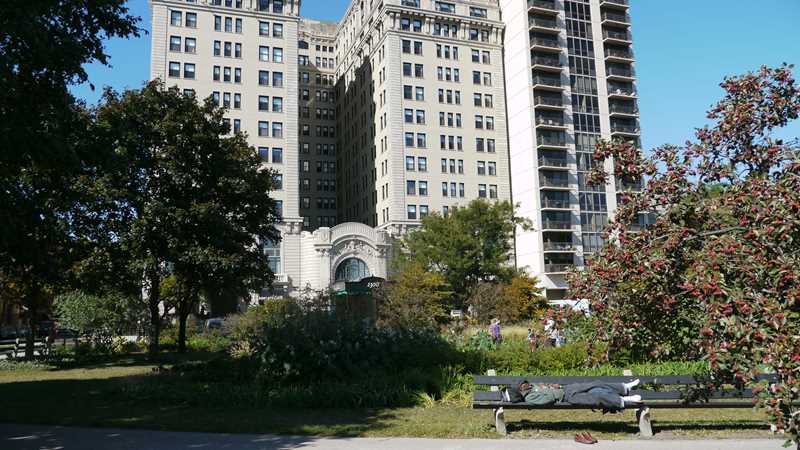 The documents prepared to nominate properties or districts for inclusion in the National Register of Historic Places are often wonderfully entertaining reads. It’s a pity that so very few of them are available online.

The following quotes are taken from the submission for the Belden Stratford, 2300 N Lincoln Park West, pictured above. The document (PDF) was prepared by Susan Baldwin and dated November 25, 1991. Now Susan Baldwin Burian, she is still active as a historic consultant.

Until World War I, there was a statute forbidding the formation of corporations for the purpose of buying and improving land, so development became a speculative venture for individuals … By forming a corporation to build a hotel and then operating it as an apartment building, Chicagoans circumvented the statute.

The tremendous demand for hotel accommodations is found to be due to the large number of residential guests, who have given up their private homes. The high cost of fuel, food and other commodities coupled with the desire of this class of people to be relieved of various home inconveniences is bringing about this change in the mode of living. Servants mean more rooms and more food. In an apartment hotel a family can live as comfortable in a five or six room apartment as they can in a very large private residence …

The mistress of her home in the Parkway and Webster hotels has her problems simplified. She is not bothered with servants, coal bills, janitors, repairs and a thousand one other vexing problems, with which the housewife is familiar, and then a community residence is less expensive than an individual residence.

Regarding the Belden Stratford:

The Belden hotel … will undertake to combine in the highest degree all the privacy and comforts of the individual home with the superior service of the finest hotel. In his own apartment the guest and his family have everything that could possible [sic] be secured in the most modern private home, including a fully equipped kitchen and its service, and in addition he has at his call at all times the highest specialized service of the most efficient and carefully trained hotel organization.

He is entirely rid of the servant problem, of all the petty details and annoyances incident to the operation of one’s own home, and yet he has all the comforts of the individual home and all the delightful service of our best hotels at a total cost less than it would require to operate a separate home of his own.