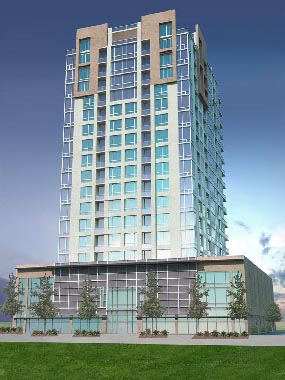 The land bounded by Michigan and Wabash avenues and 13th and 14th streets had a rough go during the downturn. On the Wabash side were the sites of GlasHaus and 1349 South Wabash, both proposed but neither built. On the Michigan side were these two sites: the old Cook County Domestic Violence Courthouse at 1340 S Michigan Ave and an adjoining parcel at 1330 S Michigan Ave, both planned for condos and, again, never built. These two properties will go up for auction this December, according to Crain’s.

Concept Developers planned to convert the courthouse building into condos and build the 18-story, 130-unit, Hartshorne Plunkard-designed Azure Tower on the parcel, which currently serves as a surface parking lot. Parkway Bank & Trust filed a $3.3-million foreclosure suit on the properties in August, says Crain’s.

Azure Tower’s glass-and-concrete design would have featured some uncommon terra cotta details around its base, according to an article printed in the November 2006 issue of New Homes. One- and two-bedrooms were marketed from the $210s to $850s, with first deliveries anticipated for mid-2008.