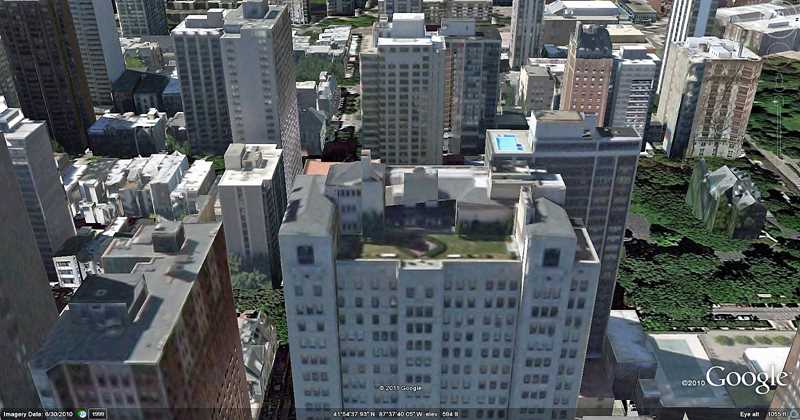 One of those buildings, 1500 North Lake Shore Drive, a 23-story co-op completed in 1929, is home to what may be the largest private rooftop terrace on the Drive. You can glimpse it in the above Google Earth view.

The terrace, which had a reflecting pool and gardens, is enclosed on three sides by what was originally an 18-room duplex “bungalow” penthouse, the elaborately-decorated residence of George Woodruff, a then-prominent Chicago banker. William Wrigley, Jr and Chauncey Blair also had residences in the building, which was nearly sold out prior to completion. Chicago Apartments, A Century of Lakefront Luxury, has 7 full-page photographs of the over-the-top (pun intended) Woodruff residence.

1500 North Lake Shore Drive is the only Chicago building by Rosario Candela, who designed many of New York’s most prestigious residential buildings. Name-dropping New York brokers, it’s been said, would rather mention Rosario Candela than Stanford White. One of Candela’s New York buildings, built in 1937, did not offer air-conditioning because “it is expected most of the tenants will live in their country or shore places in hot weather.”

In June of last year, according to Chicago Real Estate Daily, Unit 1-2A, one of only two maisonettes with private street-level entrances, was on the market at $6.35M, and Unit 22A was listed at $6.2M.

According to Coldwell Banker’s Jennifer Ames, the building requires purchasers to pay cash for their units.