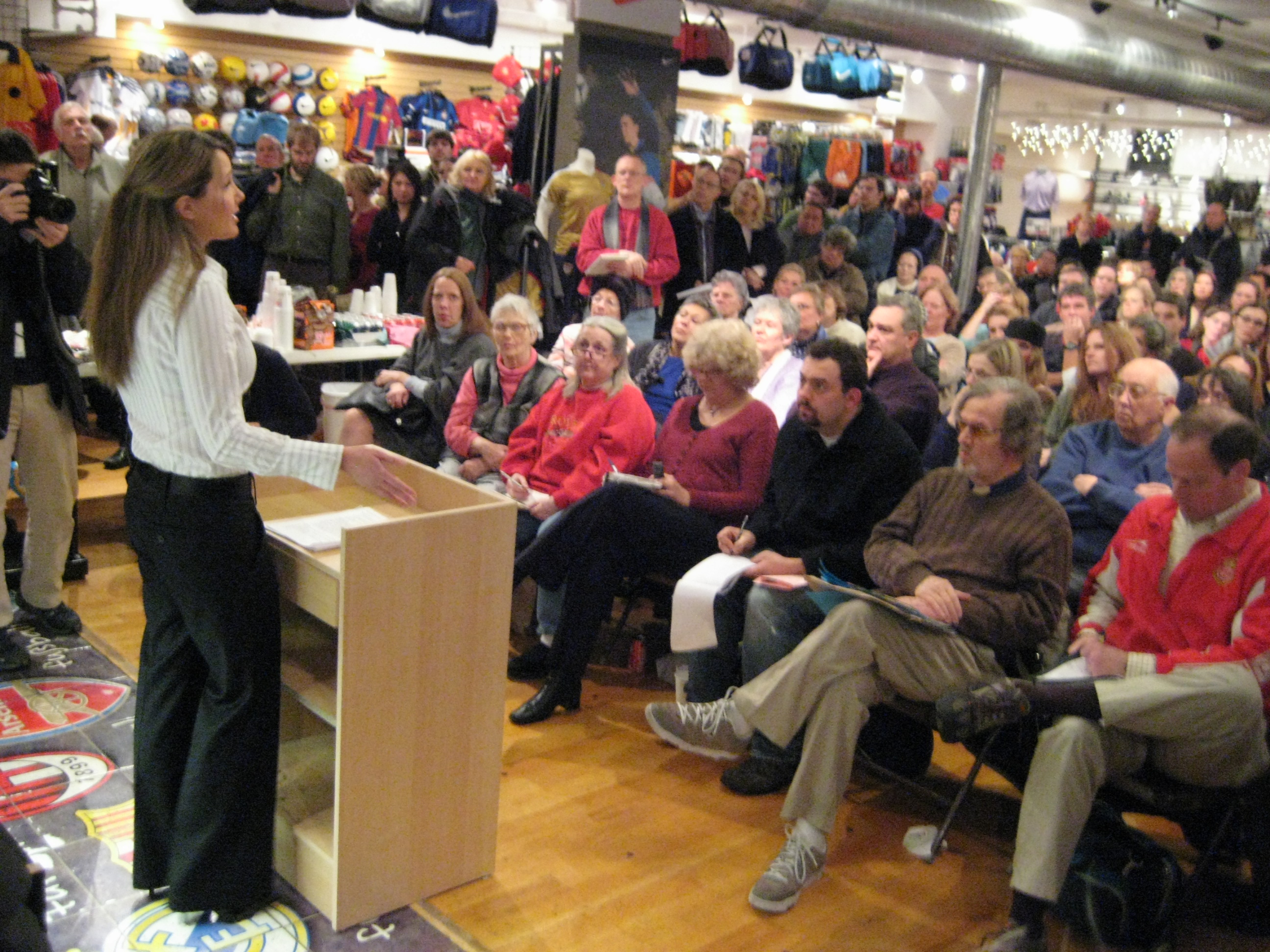 How would you like to see your community, your home and your livelihood threatened by an abusive state law and an indifferent local government? Christina Walsh, a coordinator with the Arlington, Va.-based Castle Coalition, said Wednesday that a pending City Council vote could fracture the neighborhood character that has brought prosperity to Lincoln Square in recent years.

“You’re protecting the American dream, and you’re helping each other,” said Walsh, who represents a nonprofit that opposes abusive eminent domain infractions.

Walsh was speaking at Save Lincoln Square, a community forum on Dec 5 for residents to learn more about how the city’s decision might affect their property.

The forum was held at Chicago Soccer, 4839 N Western Ave, a property that sits squarely in the middle of the Western Avenue North TIF district. The storefront rubs elbows with 15 other businesses that are threatened by a pending decision to give the city authority to seize so-called “blighted” properties for the betterment of the neighborhood. It was standing-room-only by the time the hosts opened the forum.

Ald Gene Schulter (47th) (not present at the Wednesday meeting) believes he’s protecting property owners from the rampant big-box development that gobbled up portions of Lincoln Park. By controlling the properties, he says, the city would be able to stave off irresponsible developers and preserve the character of the neighborhood. But at the same time, Schulter has backed a plan that would renovate the retail corridor and build low-rise condos along Western Avenue. “If we didn’t control this area, you would have had unbelievable things happening with growth,” Schulter said in the Trib on Friday.

Of course, property owners see it differently. One of the first speakers at the forum was Tim Van Le, a Vietnamese immigrant who fled Saigon in the 1980s. Four years ago, Le and his wife purchased a storefront on Western Avenue to open a furniture showroom. And this year, Le was given notice that his property was one of 16 included in Schulter’s redevelopment plan for the historic neighborhood. Under the plan, Chicago would be given authority to seize the properties, thereby giving the city considerable control over the future development of the corridor. In today’s Sun-Times, Schulter called the plans “hypothetical ideas,” perhaps signalling that he’s backing off on the proposal.

But the threat is real. Just ask Le, who still clings to the notion that success is just around the corner.

“I’m not living under communism anymore,” he said Wednesday at the community forum. “I’m in America. I’m living the American dream.”

One of the most commonly applied criteria for gauging the health of a neighborhood is the presence of vacant buildings. But Wednesday, community leaders countered that argument. Organizers invited Nick Toma, a Romanian immigrant who purchased a vacant building next to the Walgreens in Lincoln Square, to describe his nightmarish account of trying to renovate the building.

Toma said project was stymied by indecision on the part of the city, and his narrrative was all the more poignant when he alluded to his own efforts to escape communism in the 1980s. “It’s the same,” he said of his ongoing experience with the vacant property. For now, Toma must struggle to meet his mortgage each month on a building that’s generating no income for him. And the building itself, despite having a determined developer in Toma, can be used by the city to justify blight.

Later in the evening, Walsh described how eminent domain had been used and abused around the country. Because the definition of blight is so vague, virtually any property can be declared blighted. Walsh recounted one example of a property in Ohio that was classified as blighted – because it lacked three bathrooms and a two-car garage.

“What we need to do is apply pressure on the city to get them to take this off the table,” she said Wednesday. “There are plenty of opportunities for us to get in there and knock on their doors and tell them it’s not business as usual.”

The next step in Lincoln Square’s grassroots effort will come on Dec 12, when the City Council is expected to approve Schulter’s proposal for the neighborhood.

Newer Post
The changing face of Pilsen
Older Post
Chicago deal of the day: up to $8,000 at McKinley Park Lofts