Edgewater has been “on the cusp” for years now, although certain parts still feel creepy.
The commercial strip near the Bryn Mawr el stop, particularly, has all the raw ingredients for a destination shopping district, but despite certain encouraging signs [ok, there is a Starbuck’s and Francesca’s and the new bakery-cafe], a lot of it remains pretty sketchy. So our goal this week is to look at what you can find in Edgewater for just below $400,000.

At 1262 W Bryn Mawr there are actually 3 units for sale, although only the garden unit is in our price range . This is a top-notch gut rehab of an impressive classic graystone at the edge of the Lakewood-Balmoral area, which is certainly one of the choicest sub-hoods in the city. 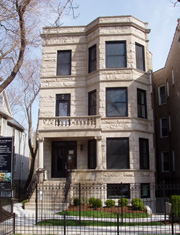 The garden unit has 2 bedrooms and 2 baths in 1,614 square feet. It’s offered by Dean Stellas of JP Stellas Properties, at $364,000. It has its own entrance from a patio in front of the house [paved with bricks recylced from the graystone’s demolished parts]. We saw the unit after taking a look at the one on the second floor, which is also on the market [for $549,000], and the quality is pretty consistent throughout, with nice floors and trimwork, although for those who care — and apparently there are a lot of you out there — the garden unit has GE Profile appliances as opposed to the Jenn-Air packages upstairs. But to its credit, the garden’s kitchen features granite countertops [are there any other kind?] with a honed as opposed to glossy finish. The bathrooms are pretty lavish, with a whole lot of limestone.

There’s an extra space at the back of the apartment which the developer is marketing as a “den,” but it’s really just a weird windowless space they couldn’t figure out what to do with but it’s really not a “room.” In a similar vein, they are marketing a a crawl space you access through a closet as a wine cellar.
The rehab involved extensive additional excavation in the basement to create the garden level, with all new drainage and plumbing systems that enable it to have 8 1/2 foot ceilings, which really does make a difference in how the place feels. That said, there is no escaping the fact that it’s a garden apartment [even the most super deluxe appliances will never outbalance the value of sunlight], which is why it’s priced the way it is.