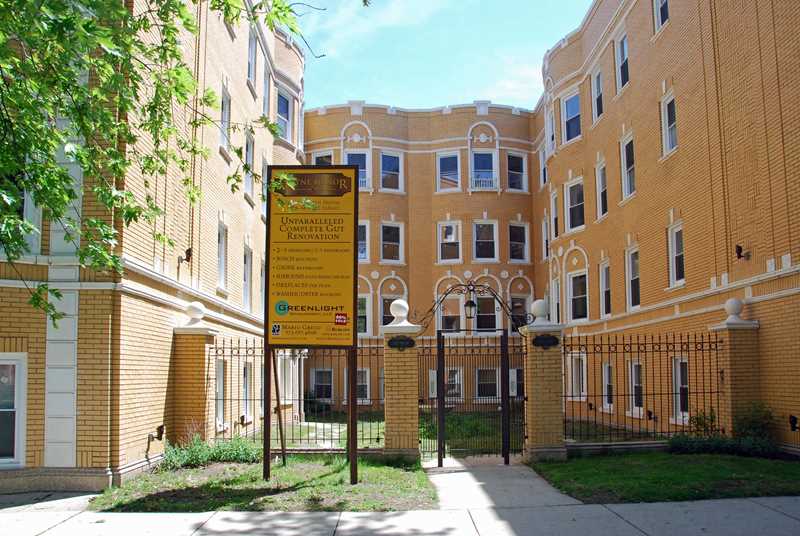 Rogers Park developers periodically fall prey to a state of irrational exuberance. The peak of the most recent mania had already passed in May of 2008 when a 2-day survey of Rogers Park took us to more than 100 active condo conversions. It was already clear that the bubble had popped, and it only remained to determine whether Rogers Park condo values would plunge as steeply as they had after previous market surges, and how long they would remain depressed.

One of the projects we visited was then known as Hoyne Manor, 7401-7411 N Hoyne. Five years ago today reports surfaced that the lender had filed a foreclosure proceeding. Seven of the 30 units were reported sold, and another under contract, with the remaining 2- and 3-bedroom units priced from the $180s to $270s.

The development now goes by the name of the Golden Court Condominium. The lender secured a judgment and an order of possession in the foreclosure case, but the status of the foreclosed units is unclear from public records. They have not been resold.

It took well over a decade for Rogers Park condo values to recover after the condo collapse that followed the boom years of the late 1970s. There were far fewer conversions during that boom than there were in the most recent one.

According to a recent analysis, distressed properties accounted for 73% of all condo and townhome sales in Rogers Park last year. The shadow inventory represented by lender-owned units at the Hoyne property and many others will have an impact on values for some time.

Any guesstimates as to when Rogers Park values might return to the levels that prevailed during the recent boom?