Jerome Bressler, who we’ve previously identified as Chicago’s sleaziest rental agent under his current name and Jerome Bressert, his former name, has been terminated by Exit Strategy Realty.

Kudos to Nick Libert, the firm’s managing partner, for terminating Bressler, and for taking action to clean up the sprawling web of illegal and deceptive ads that Bressler spawned.

According to an email I received from Mr Libert this morning, grounds for termination included a) unauthorized distribution of copyrighted photos; b) failure to disclose arrests and criminal convictions to the Illinois Department of Financial and Professional Regulation; c) “partial closure and near total elimination of our Zillow feed due to false ads being placed;” and d) Bressler’s training video instructing agents how to place false ads. 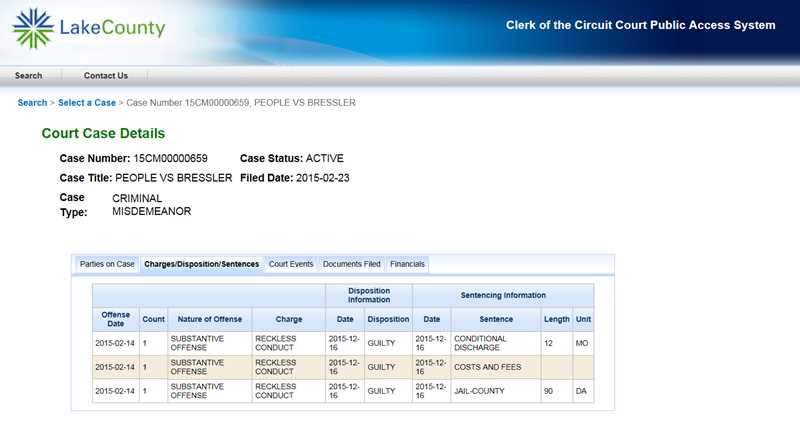 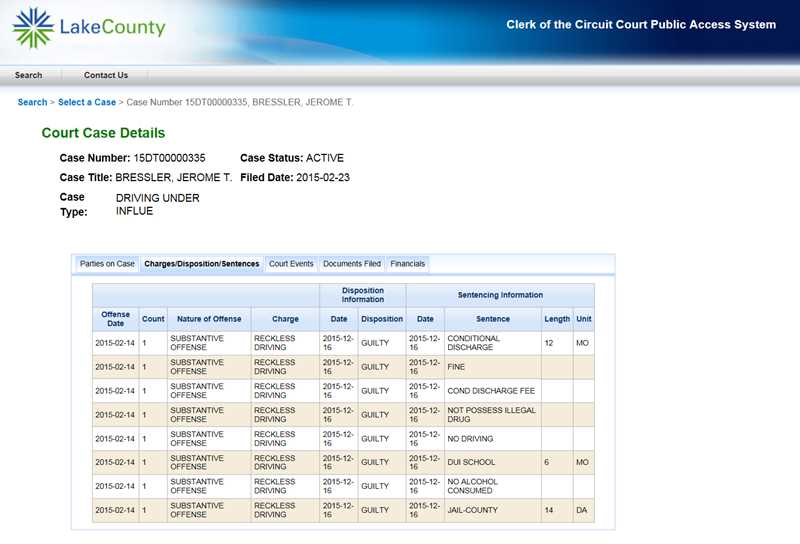 Bressler / Bressert has a history of convictions in DuPage County and in Arizona. His most recent convictions, late last year in Lake County, illustrated immediately above, were for reckless conduct and driving under the influence. As a result of those convictions he was sentenced to jail terms but placed under 12 months of court supervision (akin to probation). Conditions of his supervision included no driving and no alcohol.

Bressler was arrested on February 23 for reckless driving. The screen cap at the top of this post indicates that he was in custody in the Lake County jail as of this morning.

Bressler’s criminal history, and his failure to report it in full to IDFPR, will hopefully result in the loss of his real estate license, and Chicago properties and renters will no longer be placed at risk by him.

Bressler is not the only convicted criminal who’s worked as a leasing agent at Chicago rental services. One rental service even allowed a career criminal to work for months under a false identity, terminating him only after being informed of his background by YoChicago. As a renter, you need to carefully research any rental service / apartment locator / apartment finder before agreeing to meet with them. Be aware that many positive reviews at Yelp and on Google+ are fraudulent.

The only safe way to avoid falling victim to a scofflaw rental service leasing agent is to avoid all Chicago rental services and work directly with properties. YoChicago’s apartment reviews and lists make it easy for you to find an apartment in sought-after lakefront neighborhoods.