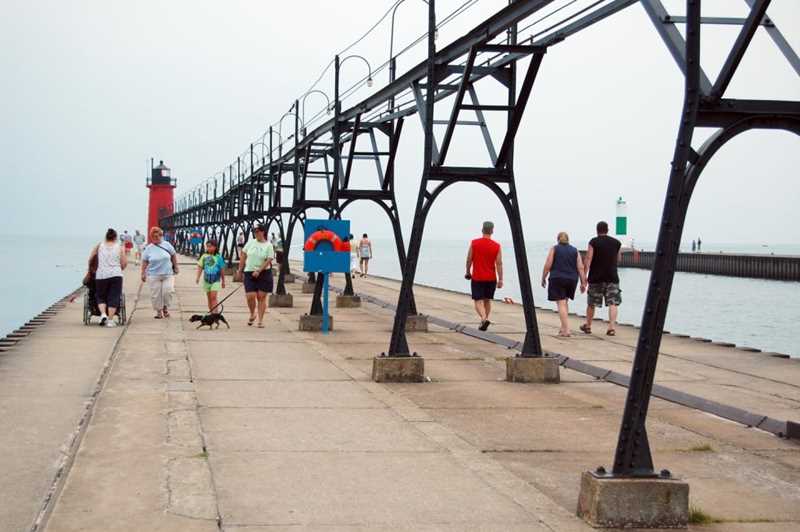 It’s 9:45 on a muggy Monday morning, and the city skyline is quickly shrinking in my rearview mirror. I’m spending the day doing the dance that consumes the summers of massive numbers of Chicagoans, following the gentle curve of the lake out of urban chaos and into the small peaceful towns that hug the shore in northwest Indiana and Michigan.

A century ago, I could have headed north to a resort in then-suburban Edgewater for a weekend refuge, but these days, city folk must head farther afield for their getaways.

How far? That’s the key question for many buyers of new homes in vacation communities. No one wants to summer in Skokie, though the commute is hard to beat. Chicagoans want their second homes to be far enough that they can forget Chicago. Many, however, also want new summer homes close enough that they can escape there without spending the weekend driving.

With these criteria in mind, I set out to explore towns that have new-home developments within a two-hour drive of the city (rough driving times from Chicago are noted below, but remember, traffic can be a big factor).

New homes are available in a wide variety of styles and price ranges in these vacation spots, from the low $100s to $1 million-plus, and building in this market still appears robust. At a time when investors have been backing out of the residential real estate market, vacation-home sales rose to a record 1.07 million in 2006, up 4.7 percent from 2005, a trend evident on my journey. Billboards touting vacation homes for sale are ubiquitous. In New Buffalo, Mich. alone, I counted more than a dozen developments of vacation homes looking to lure buyers from the opposite shore.

The towns where these projects are located follow some of the same formulas (beach, bistro, ice cream, trinkets, potpourri…), but they also have distinct personalities, which I’m determined to discover. So, windows down and radio blaring, I’m headed 45 minutes from downtown Chicago to my first and most unexpected stop, Gary – yes, Gary – Ind.

Gary bears the stigma of heavy industry and high crime rates, but you’d never know it in Miller Beach, surrounded on three sides by tranquil Indiana Dunes National Lakeshore Park. And the lakeshore, I’m told, is the hook that reels Chicagoans buying vacation homes into their purchases.

“It’s kind of like this little island pocket,” says Holly Futrell, listing agent for East Edge at Miller Beach. “People will come to Miller Beach and say, ‘Oh my gosh, I can’t believe this is Gary, Indiana.'” East Edge, located one block from the beach, has 12 two- to four-bedroom single-family homes priced from the $400s to the $510s and 16 two-story townhomes with two bedrooms and dens for less than $300,000.

Miller’s main drag, Lake Street, is nearly empty when I roll into town at 10:30 a.m. The deceptively named Miller Bakery Café, a sophisticated white-linen affair, is closed for the day, and it’s too early for any action at Theatre by the Lake, which hosts stand-up comedy and acting classes. 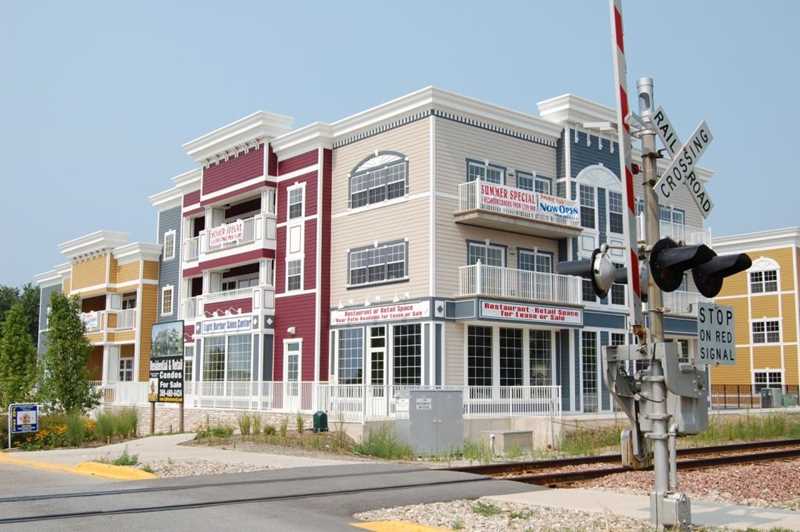 I duck inside the Lake Street Gallery, filled with wind chimes, stained glass lamps and oil paintings by local artists. Owner Joyce Davis calls Miller Beach an “eclectic community,” peopled by both millionaires and the impoverished, and well-stocked with beach-seeking Chicagoans.

Miller’s own Lake Shore Drive is composed of two narrow quiet lanes fronting quaint, well-kept cottages. I ditch the car and cross a sandy ridge onto Wells Street Beach. The miles of soft white dunes would be idyllic if not for the specter of smokestacks from the nearby U.S. Steel plant silhouetted in the distance. The backdrop looks like something out of Fritz Lang’s Metropolis, but it doesn’t faze the families building sandcastles or teenage girls sending text messages while sunning themselves.

The billboards on the way into Michigan advertise vacation communities whose names inevitably include the words “harbor,” “lake,” “dunes” or “shore.” As I get off the highway in New Buffalo, though, every vehicle seems to be turning away from the lake. I follow a winding stream of cars through acres of otherwise unspoiled forest until we finally spill out into an oceanic parking lot for the monolithic Four Winds Casino Resort.

The resort, which opened in early August, is expected to draw more than four million visitors a year to the area. “New Buffalo is going through a tremendous change. I think the fact that there is a very high-end resort in the vicinity is going to make things more valuable,” says Karen Conner, whose Esperanza Development Group is building the aptly named Walden for city folk in search of quiet.

Walden’s 22 secluded cedar cottages have two or three bedrooms, two to three baths and 1,300 to 1,875 square feet. With screened porches, decks and woodburning fireplaces, they offer a level of comfort Thoreau never enjoyed, but the brand new houses have rustic touches too. Cars, for instance, get parked outside, on the natural growth that surrounds the homes. “These homes have the look on the outside of nostalgic summer cottages,” Conner says, “but inside they’re very modern with cathedral ceilings, with lots of windows and skylights.”

Many of the town’s new developments trade on Chicagoans’ desire for a return to nature. River Bluff’s 16 home sites and million-dollar houses sit next to a 35-acre nature conservancy, and Camp Buffalo Cottages, with 19 three- and four-bedroom homes priced from the $330s to the $420s, has an outdoor amphitheatre, fire pit and swimming pool on its wooded site.

Downtown New Buffalo is hopping. For-sale banners drape rows of sparkling new homes whose bright colors are a sharp departure from Chicago’s ubiquitous dark brick. Mothers with small children, groups of shirtless boys and bikini-clad girls, and older folks clutching lawn chairs all roll languidly down Whittaker Street on a pilgrimage to the water. Others sit on park benches outside the restaurants, clothing stores, galleries, spas and wine shops that line their path.

There seems to be at least one ice cream shop for every person in town.

Yes, New Buffalo has its Dairy Queen and Pizza Hut and Wendy’s, but it also has its Kite’s Kitchen and Ozzie’s Eatery and Pierre Anne Creperie. I enjoy a simple steak sandwich at Bentwood Tavern, located inside Marina Grand Resort, where hotel condos are being sold from the $300s.

At 6 p.m. the sun is slowly sinking toward the lake, but the crowd at Silver Beach in St. Joseph is still going strong. More than a dozen volleyball courts are in play, parents chase their children across the sand, and couples power-walk with their dogs past large-scale beachfront sculptures. Palaces with expertly manicured lawns line a bluff overlooking the water, giving St. Joseph a more moneyed vibe than other towns on my itinerary, but I can’t see a single nose upturned.

There are plenty of people milling around in the city center – and no wonder, the streets in St. Joe’s are paved with fudge. Fudge and ice cream. The glorious smell wafts out of Kilwin’s and Cabanas Ice Cream and Chocolate Cafe, all within a block of each other. I want to check out some of the new vacation-home developments in town, Lighthouse Dunes or Sable Shores or Lighthouse Point, but there are more than 100 flavors to be tasted at Cabanas, and that doesn’t even include the snow cones they’re serving on the sidewalk.

Besides, I’m not sure I’m dressed well enough to pose as a homebuyer at Lighthouse Dunes, a tony six-site development by Chicagoland design-build firm Orren Pickell. The two remaining homes (located 400 feet from the private yacht club, don’t you know) are priced from $1.2 million.

Instead, I think, I’ll ride out my sugar high hiking to the city’s beloved North Pier lighthouse, a replica of the original built in 1832. That plan gets foiled too, however, when I find myself hunting down all 30 miniature cars, designed by regional artists, in an outdoor exhibit spread throughout town. 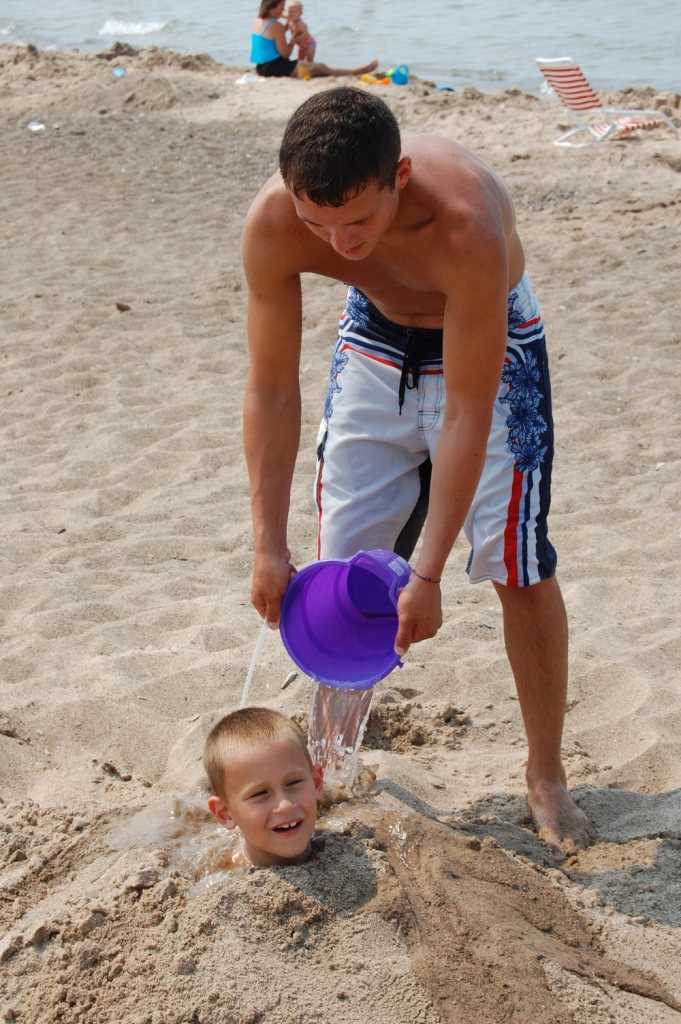 I buy a donut the size of my face from Dale’s Donut Factory, and spend some time people watching under the floating Chinese lanterns outside the Krasl Art Center. Given the number of families on the street, it feels like there’s a festival in town, but I guess it’s just another Monday night in St. Joseph.

The first thing I see in South Haven is a sprawling Wal-Mart Supercenter flanked by a nauseating parade of fast-food chains and gas stations. But faster than you can say “suburban Chicagoland,” I have reached the downtown, and all is forgiven.

Phoenix Street cuts through a cluster of eclectic shops – Biddy Murphy Celtic Gifts, Decadent Dogs, Renaissance (a “gypsy boutique”). More than 20 people are waiting outside for a bullhorn to announce their table at old-timey restaurant Clementine’s. Sherman’s Dairy Bar has a line out the door.

Some of the new-home communities underway here seem comparatively affordable. Mystic Home Builders, for instance, is advertising new single-families priced from the $160s. The developer’s latest project, the 122-unit Lighthouse Village (notice a theme?), is part of “Lifestyles of South Haven,” a 45-acre mixed-use development of shops, condos and houses.

I set out for the pier at South Beach, past families lounging on the white rocks, frat guys barbequing, and a group of rainbow-haired teenagers playing Hacky Sack. I even stumble on a couple in their late 70s stealing a kiss. On the beach, grown men are as excited about building sandcastles as their kids, and a guy named Roy asks me to take a photo of him and his fiancé in front of the towering red lighthouse.

I feel like I’m on the set of a Disney movie and decide to take off before everyone breaks out into song.

It’s after 9 p.m. when I grab a seat at the bar in Tello Italian Bistro and the bartender, 21-year-old Mona Iehl, brings me back down to earth. Over risotto, she tells me of the disparity between the coast, where vacationers have their cottages, and the residential part of town where local girls, she says, are advised not to walk alone at night. Still, she says, Chicagoans get what they’re looking for when they come here.

Mona tips me to the nightlife in town – thirty-somethings hang out at a couple of bars by the harbor, and most of the “older people” usually have gatherings at their cottages – but I’m beat.

I want to see so much more – art galleries and beaches and dunes and the Lake Michigan Shore Wine Trail – but there just isn’t enough time. No wonder so many people keep coming back.