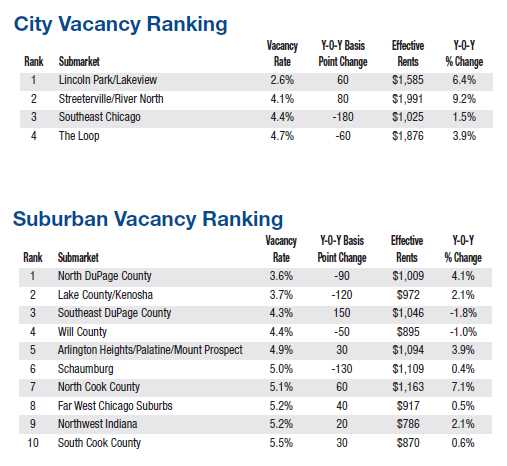 Marcus & Millichap just released its Apartment Research Market Report for the second quarter of 2013. Free registration is required to access the full report. Here’s the summary:

Apartment vacancy will fall in the Chicago metro in 2013 as another year of solid job growth sparks demand for rental hous¬ing. While current economic conditions do not conjure memories of the last economic expansion, the local economy nonetheless proceeded through the first quarter on firm footing.

Local payrolls expanded and the federal government revisions to employment saw the metro’s employers creating roughly 50 percent more jobs over the past three years than initially reported. Accordingly, the demand generated for rental housing has been quite strong and will remain vigorous in the quarters ahead as more residents enter or re-enter the working population.

Potential impediments to further progress in the apartment sector include the metro’s high unemployment rate, which sat near 9 percent as the first quarter concluded. The effects of high unemployment may suppress many households’ incomes and wages, thereby affecting rental housing affordability, especially in older properties in working-class communities. As a result, some apartment operators may defer imposing higher rents in favor of retaining their long-time tenants.

Construction of new rental towers in the city may emerge as a concern for institutions and large investors in the near term, but luxury rentals may minimally impact the operations of older properties that attract a different tenant profile. Assets in north side neighborhoods remain a focus for investors, and the best assets typically trade at cap rates ranging from 5 percent to 6 percent. Currently, cap rates for suburban Class B and Class C assets in the collar counties are in the 7 percent range.

The performance of suburban proper¬ties has generally trailed apartments in more urbanized areas. Some have been affected by shadow stock, comprising condos and single-family residences deployed as rentals. An improving job market, however, will spark additional formations of new suburban rental households.

Employment: Local employers will create 66,900 positions in the Chicago metro in 2013, expand¬ing total employment 1.5 percent and exceeding the gain of 60,600 jobs last year. With the in¬crease, the metro economy will have recovered two-thirds of the positions lost during the recession.

Construction: Approximately 5,450 apartments will come online in 2013, more than twice the number of units delivered last year. Completions in the city will expand rental stock there 1.6 per¬cent; key completions include the Coast and K2 luxury towers.

Vacancy: Job growth will fuel new household formations and support an 40-basis point dip in va¬cancy this year to 4.3 percent, with the rate in the suburbs on track to fall to 4.0 percent. In 2012, vacancy in the metro increased 20 basis points.

Rents: Led by gains in the city, average effective rents in the metro will increase 3.2 percent this year to $1,202 per month, modestly outpacing the 3.0 percent jump registered in 2012.