A little over a year ago we questioned whether Urban Lux, a rental service on our do-not-call list, was responsible for the dumbest-ever reviews at Yelp. Several days ago a commenter responded with the following: 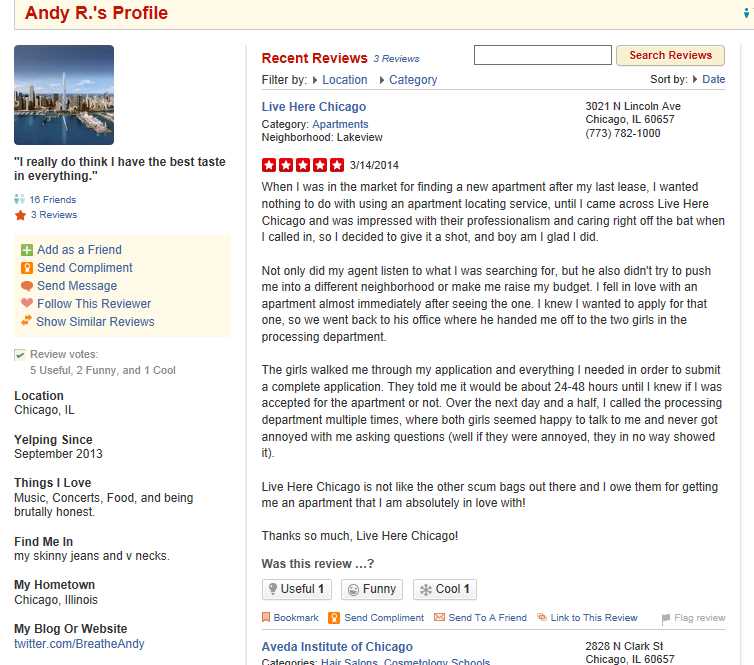 The commenter appeared to have some inside knowledge of the Andy R and Kristin K Yelp reviews in the above images, so we decided to take a closer look at the Yelp reviews for Live Here Chicago a/k/a Rent Here Realty. 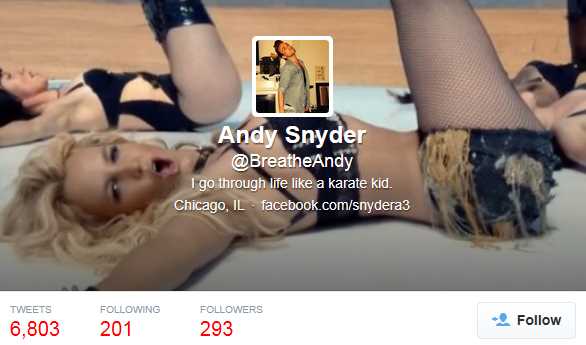 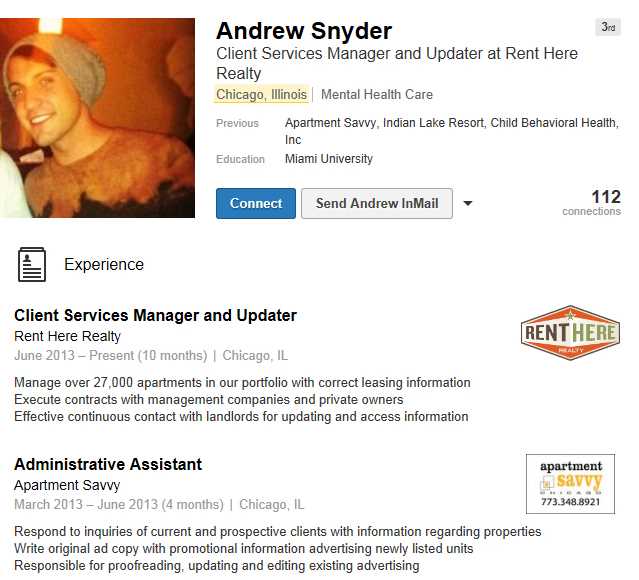 A LinkedIn profile identifies Andrew Snyder as an employee of Rent Here Realty a/k/a Live Here Chicago. He was formerly employed at Apartment Savvy, another member of our do-not-call list.

The trail to Kristin K isn’t as transparent as the one to Andy R a/k/a Andrew Snyder a/k/a Andrew Michael, but her Yelp review reeks of dishonesty. Would a consumer really write that Live Here Chicago has “great relationships with the best landlords in Chicago?” How would they know?

Andy R a/k/a Andrew Snyder a/k/a Andrew Michael has a Facebook friend named Kristin Kolehouse who’s employed at Rent Here Realty a/k/a Live Here Chicago. If our commenter had it right, this would be the Kristin K who posted the Yelp review at the top of this post.

Rent Here Realty a/k/a Live Here Chicago has been on our rental service do-not-call list since we first published it just over three years ago. The company earned that position, as have many others on the list, by advertising properties without legally required authorizations, by employing unlicensed agents and by Yelp reviews that didn’t appear to have the ring of truth about them.

It’s possible, but highly unlikely, that someone set out to harm Andrew Snyder and Kristin Kolehouse by masquerading as them on Yelp. There doesn’t appear to be any reason to give them the benefit of the doubt. That’s true, in my opinion, even if they insist – as they should – that Yelp remove the reviews.

Is it even remotely possible that the Andy R’s and Kristin K’s of the world don’t realize how many laws they’re violating by their dishonest Yelp reviews? Is it possible that Live Here Chicago a/k/a Rent Here Realty is unaware of these reviews? How corrupt does a company have to be to allow these reviews to remain online?

How stupid are the Andy R’s and Kristin K’s if they’re unaware that many employers will Google them, see their dishonesty and never hire them as a result? I know I’d never even consider hiring anyone who remained employed at Live Here Chicago for any length of time, and I’m confident I’m not alone in that approach.

The folks who write or solicit phony reviews at Yelp and other websites are living in a make-believe world if they think that there isn’t an efficient mechanism to punish their behavior. There is. Its name is Google, and short-sighted actions designed to produce positive results will often have long-lasting and more consequential negative ones. Omar Khayyam had it right nearly a millennium ago:

The Moving Finger writes; and, having writ,
Moves on: nor all thy Piety nor Wit
Shall lure it back to cancel half a Line,
Nor all thy Tears wash out a Word of it.