Is a career criminal working as a Chicago leasing agent?

A tipster alerted me this morning that an individual with a lengthy criminal record is applying, using an alias, to work as a leasing agent at some of Chicago’s rental services.

My rental service tipster became suspicious and determined that the individual who’d applied for a leasing agent position was actually Kenneth W. Arron. You can read about his extensive criminal background in this Chicago Tribune article.

Leasing agents are uniquely well positioned to engage in various forms of fraud, including identity theft. When you apply for an apartment, you’re supplying your Social Security Number, Driver’s License, previous addresses, employment history and more.

If you’re applying to rent an apartment in a smaller building, you’re likely to be asked to write checks for the first month’s rent and security deposit. A leasing agent can direct you to make those checks payable in a way that he or she can cash them.

If you’re running a leasing service, you need to verify the identity of your leasing agent applicants and ratchet up the background checks that you perform before allowing them access to apartments. The State of Illinois has a sorry history of issuing real estate licenses to convicted criminals, and you need to be aware of that fact before employing anyone as a leasing agent.

My tipster needs to remain anonymous, but everyone owes him their thanks for taking the time to bring this information to public attention. 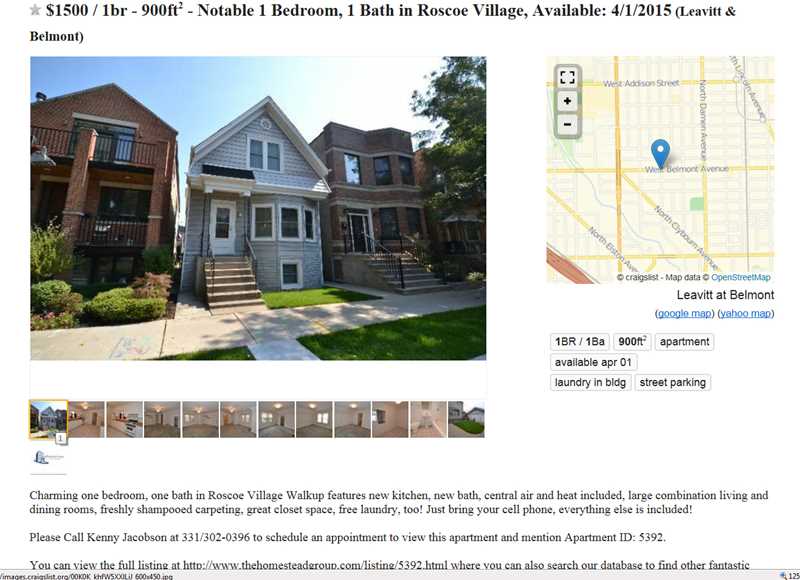 Added: 10:20 3/31. I contacted the phone number in the above ad, one of 130 from Kenny Jacobson at The Homestead Group, and asked to speak to Kenneth Arron. The voice on the other end of the line said: “speaking.” When I stated that I was calling on a Craigslist ad under the name of Kenny Jacobson, he responded: “This is Kenny Jacobson.” I asked whether he had always been Kenny Jacobson and he answered that he had been.

A while later I received a return call from Kenneth Arron who fessed up to his deception. He told me he’d been living in a spare room in his parents’ home since he got out of jail and was doing everything possible to live a straight life.

In an amusing side note, Arron began the conversation by asking why I was trying to “ruin his life.”

I’ll spare you the details, which are exactly what you’d expect from a con artist. Needless to say, he didn’t see any conflict between going straight and working under a false identity.

Kenneth Arron stated he’d been employed at The Homestead Group for “a couple of weeks and closed a couple of deals.” He reported that he’s turned in his keys and is no longer employed there.

The Homestead Group verified that he has turned in his keys and is no longer employed.

I expect Arron to turn up at another leasing service under another name.