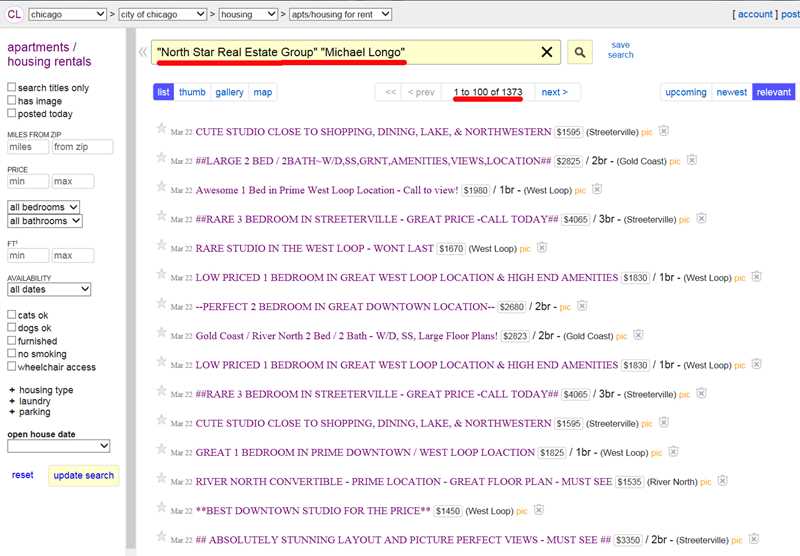 A mere four agents at North Star Real Estate Group had over 4,100 apartment ads active on Craigslist yesterday evening. Three of them accounted for nearly 3,900 ads.

Michael Longo ranks second among North Star’s steroidal spammers with 1,373 ads. We quickly identified six properties that accounted for 870 of those ads – an average of 145 ads per property. Many of Longo’s ads were for properties from which North Star has not received the written authorization required by the Illinois Real Estate License Act. Quite a few ads were for types of units not currently available at a property, and available for later dates only at rents hundreds of dollars higher than advertised. Bait and switch.

A veteran property manager at one of those 6 properties replied to my email inquiry as follows: “I have never even heard of this company. This is really amazing.”

I’m not amazed, but I will concede that I can’t recall any spammer matching Longo’s 180 active Craigslist ads for a single property.

We’ll take a closer look at North Star’s other spammers in coming days. We’ll also focus in on North Star’s non-advertising managing broker, who appears to be just some random rent-a-license dude based in Omaha, NE.

Update, 3/24, 2 pm: After being directed by a property manager to remove ads from Craigslist, and agreeing to do so, Michael Longo proceeded to renew ads for the property and add more. What kind of treatment do you think a one-time renter can expect from Longo, when he treats a property this way?

Update, 3/26, 11 am: Longo is still publishing new ads for this property, after reportedly agreeing to delete all of them.