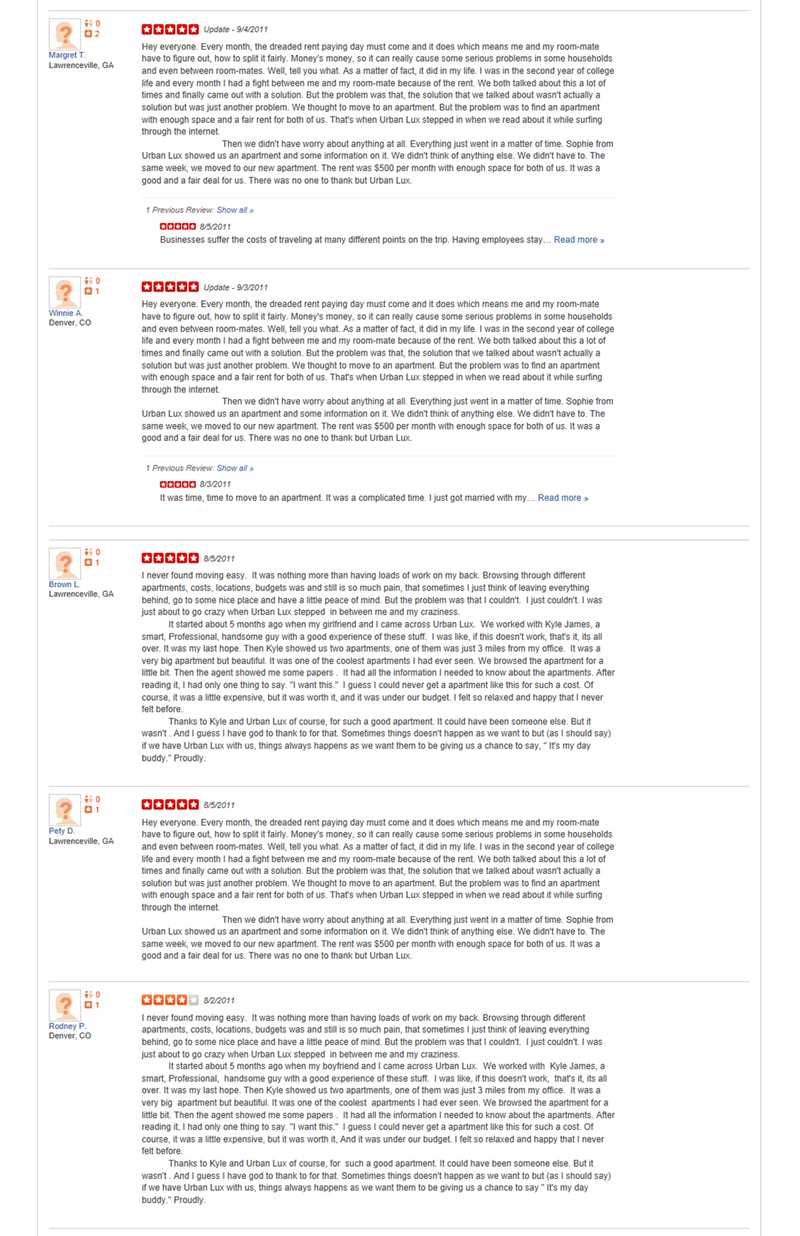 Reading positive reviews of rental services on Yelp invariably reminds me of what Oscar Wilde said of a Dickens’ short story. “One must have a heart of stone to read the death of little Nell without laughing.”

If you’ve frittered away some time scanning Yelp to check out a rental service, you’re familiar with the phonies, which are often funnies. The story: a “rock star” agent quickly becomes a renter’s soulmate, delivers awesome service above and beyond, and rapidly matches said renter and her boyfriend with the perfect place. Her delight in the experience impels her to create a Yelp account, share her joy with the world, and never Yelp again.

Creating fake positive reviews is always a dumb move, but some attain a stunning level of stupidity.

Dishonest positive reviews typically give the full name of the “rock star” agent, and they’re often written shortly after an agent begins employment, in a lame attempt to attract business. Six months or a year later, I see that person still employed at the same company, and still unlicensed. Thanks for providing a record.

You’ll also find patently phony negative reviews of rental services at Yelp that reek of having been written by competitors. A smarter competitor could do more serious damage with positive reviews that are easily identifiable as false, but much more difficult to write off as having come from a competitor.

If you’re looking to rent along Chicago’s lakefront from the South Loop to Lake View, you’ll find more options in YoChicago’s at-a-glance lists and maps and at the websites of major brokers than you’ll be offered by any of the rental services. Our lists deliberately don’t include some of Chicago’s worst landlords, who often rely heavily on rental services to promote their hard-to-rent product. That and the fact that they’re unlikely to show you MLS-listed condos are just a few of the things the rental services won’t tell you.

Like our Craigslist Apartment Cleanup page at Facebook if you support our effort to shed some light on the business practices of Chicago rental services. Take direct action to support the cleanup by understanding Craigslist’s Terms of use and flagging any violations you spot.

NOTE: At the margins YoChicago competes with rental services for landlord marketing dollars, so we have an indirect financial stake in keeping the competition honest. Make whatever you will of that.