Reconsidering neo-traditional. Again [and probably not for the last time]. 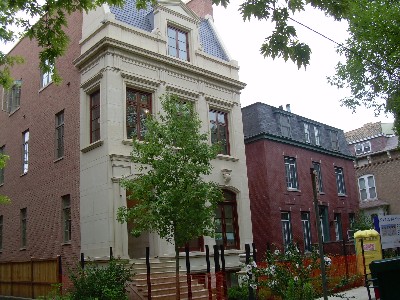 As much as Yo has railed against knee-jerk historically referenced design, we are forced to admit that modernism isn’t for everybody who lusts after new construction. So it warms our heart to see options in the traditional genre that not only reject the hegemonic tyrrany of red brick, but seem appropriate for their sites.

Someone could certainly find a reason to complain about the development of three nearly identical houses on the 2200 block of Orchard Street, the first of which is almost complete, simply because of the teardown factor. The building that still stands on the undeveloped portion of the property — which will be home to the two other triplets — is kind of interesting, and might have been re-purposed into a pretty sumptuous pleasure pad. But maximization is the name of the game at the high end [or really, at any of the ends], so it had to come down. 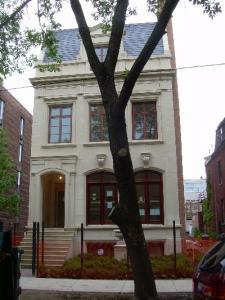 The replacements, as it turns out, look as if they’ll be deftly executed, if the first one is any indication: nice proportions, attractive windows, and a handsome Beaux-Artsy facade with just enough decoration, made from what appears to be a warm yellow sandstone. 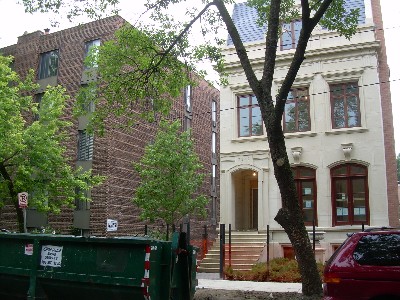 Teardowns on this block are nothing new. A few buildings date from the 1880s and 1890s, but a lot of it was built after World War II, including one lavish 21st century city palace. Most of it, though, is looks like the high-end 70s fourplusser that’s its neighbor to the south [at left in picture above], next to which the new kid sure looks like an improvement.