Early yesterday morning we published a post about the scofflaw behavior of Joi Walker, a licensed leasing agent affiliated with Chicagoland Property Group (“CPG”). Joi Walker is the mother of Collin Walker, the firm’s managing broker. We questioned whether Collin Walker would continue failing to supervise his mom’s behavior, thereby putting his license at risk. We emailed a link to our post to Collin Walker and to Joi Walker.

Our post noted that Joi Walker had 654 Craigslist ads online, many of them for properties which CPG did not have the legally required authorization to advertise. By the end of the day yesterday there were no Craigslist apartment ads containing the name Joi Walker.

Did Joi Walker, a regular church-goer and resident of a small town 50 miles southwest of downtown, suddenly develop a conscience after two years of spamming Craigslist with illegal ads? Did her husband James, a licensed leasing agent with CPG and patriarch of what we’ve called the spam-family Walker intervene? Has Collin Walker begun to take his responsibilities as a managing broker more seriously? We don’t know the answer to the first two questions, but there’s evidence that the answer to the third is “not likely.” 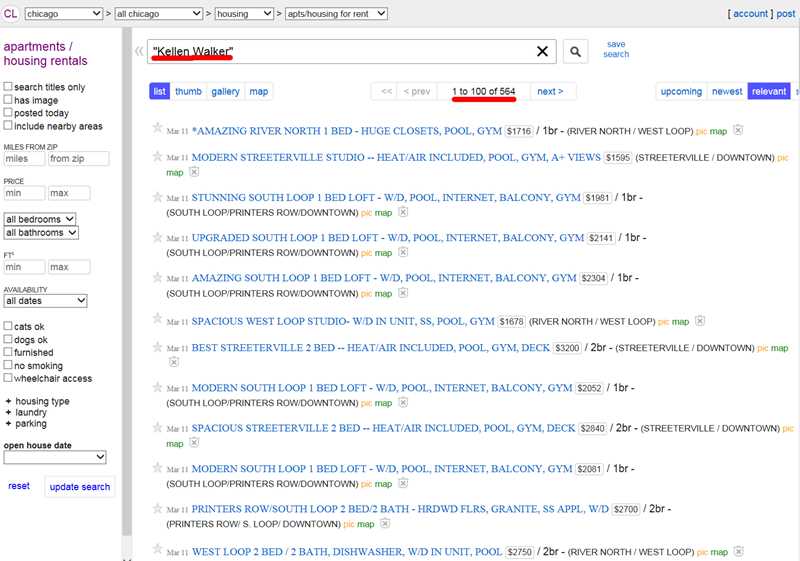 Our post yesterday noted that we would monitor the online behavior of Kellen Walker, Collin’s brother, who is also a licensed leasing agent with CPG. As of this morning Kellen had 564 repetitive apartment ads on Craigslist. At least 190 of those ads were for properties which CPG did not have the written permission to advertise that the Illinois Real Estate License Act (the “Act”) requires. Many of the ads were for the same properties his mom had advertised.

If Collin Walker doesn’t either make his brother cease and desist, or fire him, we’ll consider that an abdication of the duty to supervise that the Act imposes on managing brokers, and we’ll file a heavily-documented complaint with the Illinois Department of Financial and Professional Regulation’s Division of Real Estate. The documentation will hopefully be sufficient to result in the revocation of Collin Walker’s license.

We’ve previously called out Chicagoland Property Group as Craiglist’s worst apartment ad spammer. As of this morning CPG had just over 7,000 apartment ads at Craigslist. Cleaning up after his mother and brother won’t be enough to protect Collin’s license. We’ll be monitoring the sea of Craigslist spam ads generated by other agents at CPG. And, of course, Collin’s own behavior. We’ll email links to this post to both Collin and Kellen Walker.