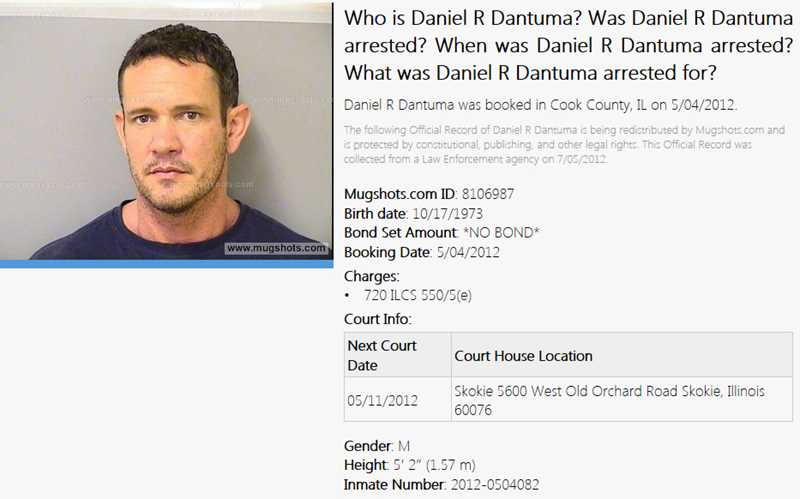 American Realty’s Dan Dantuma had 135 repetitive ads on Craigslist as of mid-morning yesterday. More than 80% of them were for a single apartment, a junior 1-bedroom at Gold Coast Galleria, 111 W Maple.

Dan Dantuma’s online history starts in 1993 when he was charged in Elgin with three counts of burglary, one count of attempted burglary and four counts of possession of burglary tools.

Skip ahead to 2009 when the Chicago Police, accompanied by a drug-sniffing canine, executed a search warrant and arrested Dantuma (pdf) after finding, among other items, “232 grams of cannabis valued at $3,712; 83 grams of cocaine with an estimated street value of $9,650” and a small amount of heroin.

Dantuma was arrested in May of 2012 on a Class 2 felony charge of possession of between 500 and 2,000 grams of cannabis.

I called Dantuma, introduced myself, told him I was writing about him and asked whether any of his arrests had resulted in convictions or guilty pleas. His response: “I wouldn’t be giving you any information on that.” When I asked him to confirm that his first arrest was in Elgin for burglary, he hung up.

We caution you to remember that an arrest is not a conviction – and that you won’t necessarily find all of an individual’s arrests or convictions online.

Dantuma’s Facebook page reports that he’s worked at American Realty since May 2011.

American Realty advertises frequently on Craigslist for new leasing agents. According to the company’s careers website, a “Clean Criminal Background” is required.

I contacted Daniel Kahn of American Realty to inquire about the meaning of that phrase. I informed him of Dantuma’s record and that I was writing about it. He suggested that what I was doing might be defamatory and that I ought to contact Lyle Jacobson, who he identified as one of the owners. Kahn hung up on me with the following: “Make this the last time you contact me or I’ll sue you. Have a good day.”

Do you know who’s showing your apartment when you’re not home?

Newer Post
K2 luxury apartments celebrates a birthday and a bridge to Jewel
Older Post
What’s for rent in the Gold Coast, Lincoln Park and Lakeview