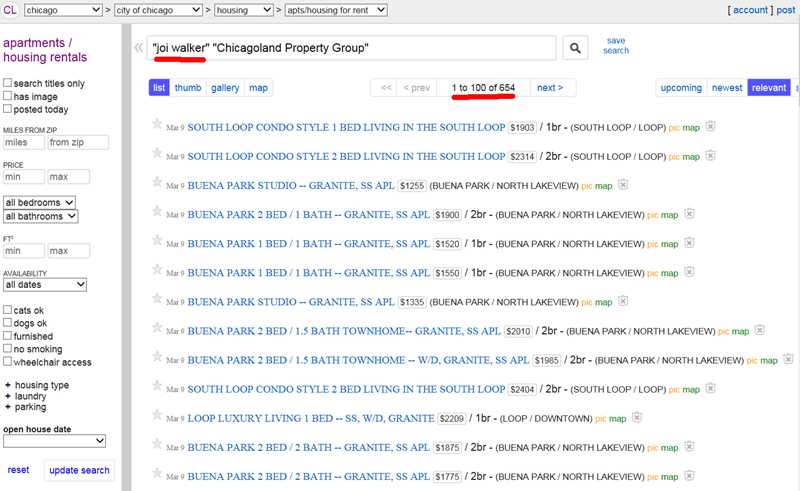 Under most circumstances a son can’t be held responsible for his mom’s behavior.

He can be, however, if he’s the sponsoring or managing broker at a Chicago rental service where his mom’s an agent and he fails to rein in his mom’s scofflaw behavior after having knowledge of it.

The son we’re talking about is Chicagoland Property Group’s (“CPG”) Collin Walker. His mom, Joi Walker, is a licensed leasing agent that he apparently recruited into the firm along with his brother Kellen. We’ve come to think of the trio as the spam-family Walker and have written about them several times in the past few years. We’ve previously identified CPG as Craiglist’s worst Chicago apartment ad spammer.

As of yesterday evening, Joi Walker had 654 repetitive ads at Craigslist. Sampling a small number of them surfaced ads for half a dozen properties that have not given CPG the written authorization to advertise that the Illinois Real Estate License Act (“Act”) requires. A number of the ads we checked were unavailable at the time or for the amount of rent specified in the ad. One ad quoted a 1-bedroom as available for over $600 less than the lowest-priced 1-bedroom listed on the property’s near real-time website.

We’ve saved screen caps of the illegal ads we sampled yesterday. We will send a link to this post to Collin Walker later today. We will document additional violations periodically as they occur.

If Collin Walker doesn’t either make his mom cease and desist, or fire her, we’ll consider that an abdication of the duty to supervise that the Act imposes on managing brokers, and we’ll file a heavily-documented complaint with the Illinois Department of Financial and Professional Regulation’s Division of Real Estate. The documentation will hopefully be sufficient to result in the revocation of Collin Walker’s license.

Cleaning up after his mom won’t be enough to protect Collin’s license. We’ll be monitoring Kellen Walker’s behavior also, and that of other agents at CPG. And, of course, Collin’s own behavior. We didn’t go beyond looking at Joi’s ads yesterday, but we’ve long noted ads from Collin, Kellen and other CPG agents for properties that don’t allow advertising.

You might be wondering why a firm that’s been in business for years, as CPG has, engages in wholesale spamming at Craigslist. Our educated guess is that the firm would quickly die or see its business shrink radically if it operated within the law and Craigslist’s terms of use. It’s a fair assumption that Collin Walker believes that’s the case.

Update 3/11: All Craigslist ads with the name Joi Walker in them have been deleted.