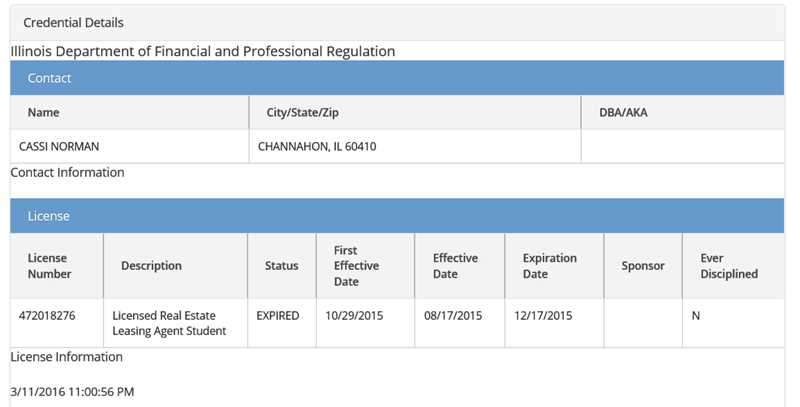 We’ve previously published posts about the scofflaw behavior of Joi Walker and Kellen Walker, licensed leasing agents affiliated with Chicagoland Property Group (“CPG”). Joi Walker is the mother of and Kellen Walker is the brother of Collin Walker, CPG’s managing broker. Our posts questioned whether Collin Walker would continue failing to supervise his mother’s and brother’s scofflaw behavior, thereby putting his real estate license at risk.

All of the Craigslist apartment ads containing the name Joi Walker have been removed, and 55 of the 56 ads Kellen had posted for a single property have been removed. As of this morning, Kellen Walker still has 508 ads active at Craigslist.

We can only speculate about the reasons for the deletion of the Craigslist ads by two of the members of what we’ve called the spam-family Walker. Is the deletion of the ads a sign that Collin Walker has begun to take his responsibilities as a managing broker more seriously? There’s evidence that the answer to that question is “not likely.” Part of the evidence lies in our discovery of a new member of the spam-family Walker: Collin’s sister, Cassi (Walker) Norman, is also affiliated with CPG. 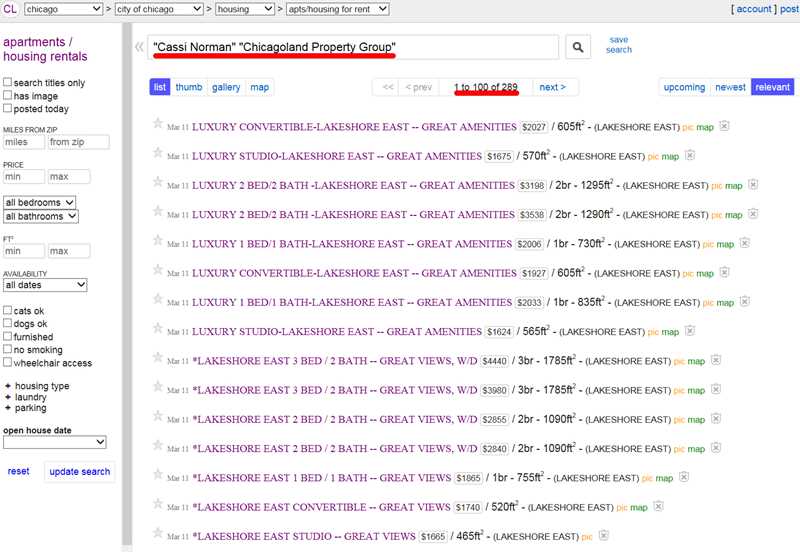 As of this morning Cassi Norman had 289 apartment ads active at Craigslist. Dozens of those ads were for properties which CPG had not been given the written authorization to advertise that the Illinois Real Estate License Act requires. The ads we’ve documented were for the same properties that her mother and brother had advertised without authorization. 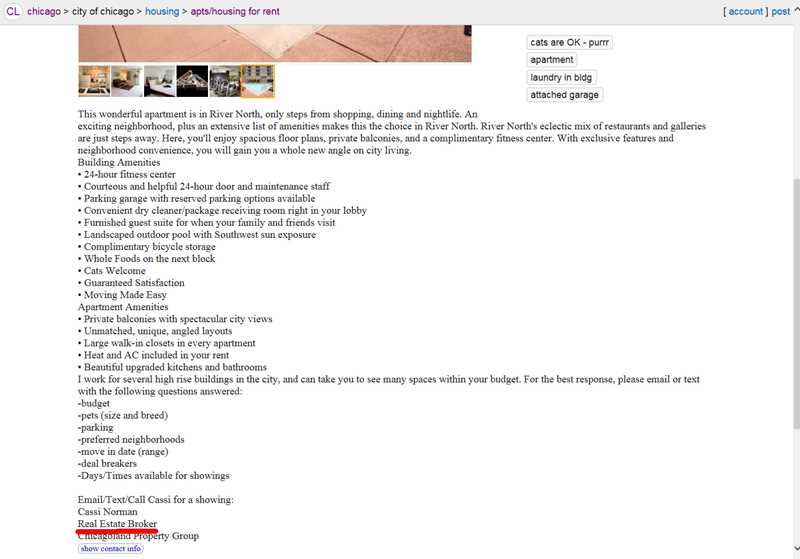 Cassi Norman held a leasing agent student license which expired on December 17 of last year (screen cap at top of post). She self-identifies in her Craigslist ads as a “Broker” or “Real Estate Broker,” but the IDFPR License Lookup database doesn’t reflect that she’s been issued a broker license. There’s a lag between the time a license becomes effective and the time it surfaces in the database, so perhaps Cassi Norman does have a broker license. Holding yourself out as a broker when you don’t have a license is a Class A misdemeanor under Illinois law. We will check the IDFPR database periodically and provide an update if a broker license is issued. We will also cross-check the effective date of that license against the dates of the ads that Ms Norman has been running for the past 30 days.

If Collin Walker doesn’t either make his sister cease and desist, or fire her, we’ll consider that an abdication of the duty to supervise that the Act imposes on managing brokers, and we’ll file a heavily-documented complaint with the Illinois Department of Financial and Professional Regulation’s Division of Real Estate. The documentation will hopefully be sufficient to result in the revocation of Collin Walker’s license.

We’ve previously called out Chicagoland Property Group as Craiglist’s worst apartment ad spammer. Cleaning up after his mother, brother and sister won’t be enough to protect Collin’s license. We’ll be monitoring the sea of Craigslist spam ads generated by other agents at CPG. And, of course, Collin’s own behavior. We’ll email links to this post to both Collin Walker and Cassi (Walker) Norman. 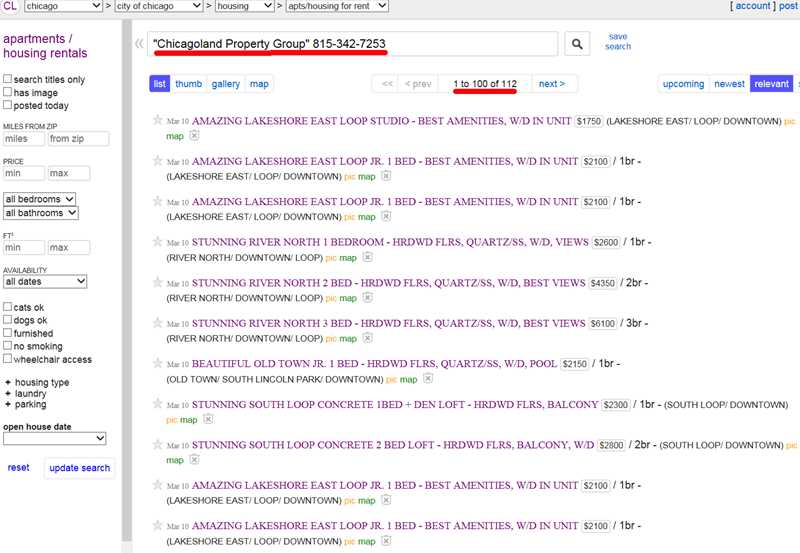 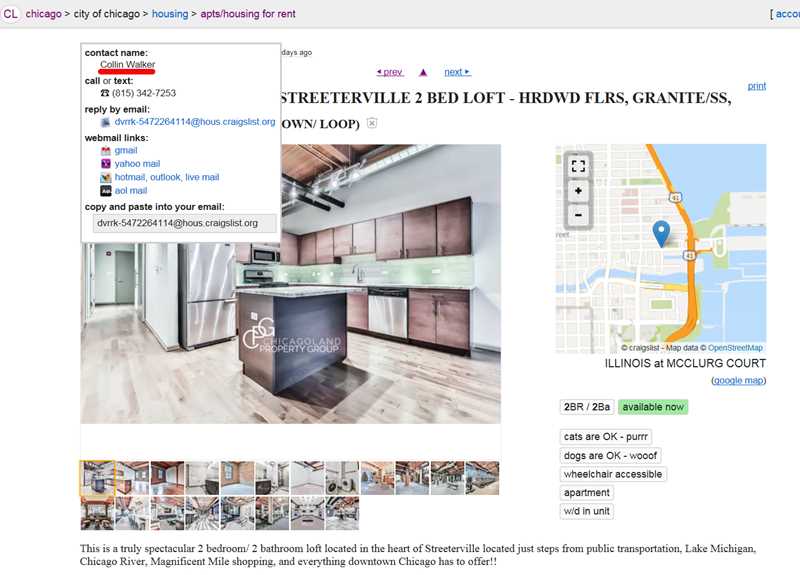 Several days ago Collin Walker took steps to make his online presence at Craigslist more opaque. All of the ads which contained his name in the body of the ad were removed from Craigslist. As of this morning he has 112 Craigslist ads active. His name appears only when one clicks the Reply button at the top of a Craigslist ad.

From what we’ve been able to learn, our educated guess is that Joi Walker, Kellen Walker and `Cassi (Walker) Norman don’t meet the renters they solicit online but toil remotely in a spam-family lead-generating spam factory. Apart from their behavior on Craigslist, their skimpy online presence reflects decent, church-going residents of Channahon, a small town 50 miles southwest of downtown Chicago. 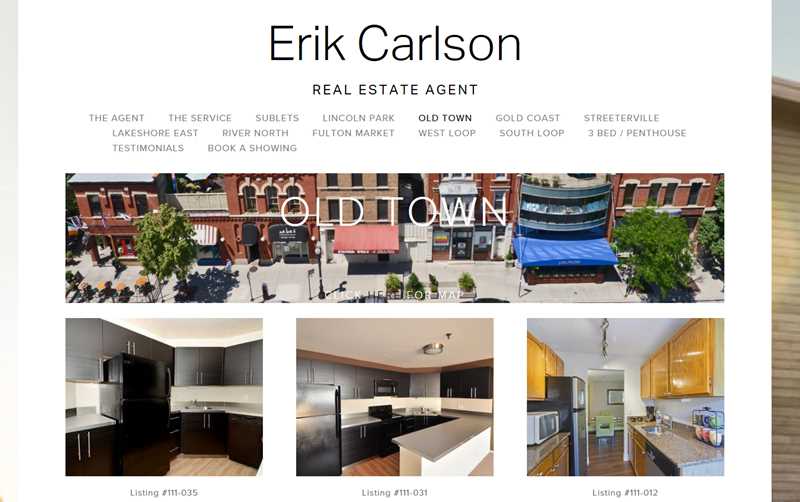 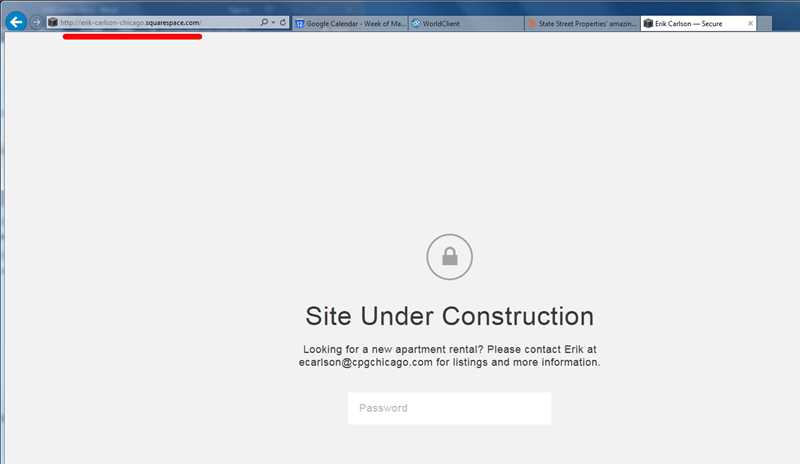 CPG agents have a history of pirating copyrighted photos from YoChicago. We chanced upon another of the pirates yesterday and sent Erik Carlson and Collin Walker an email demand to remove our images. Within a matter of hours, links to the offending site surfaced only a “Site Under Construction” screen.

We’ve been involved in the real estate business in various roles for a long time and have seen a lot of abuses. We’re stunned by the scale on which CPG agents scoff at their ethical and legal obligations in the roughly 7,000 Craigslist ads that CPG currently has online. We wonder how people who participate in such an enterprise live with themselves, and we especially wonder what the members of the spam-family Walker say to each other at family gatherings.

Managing brokers at Chicago rental services need to be aware that we won’t be focusing all of our attention on Collin Walker / CPG. We’re documenting the abuses of agents in other firms and will be making their managing brokers aware of them, and monitoring their subsequent behavior.