Cassi Norman and the scofflaw-family Walker, an update 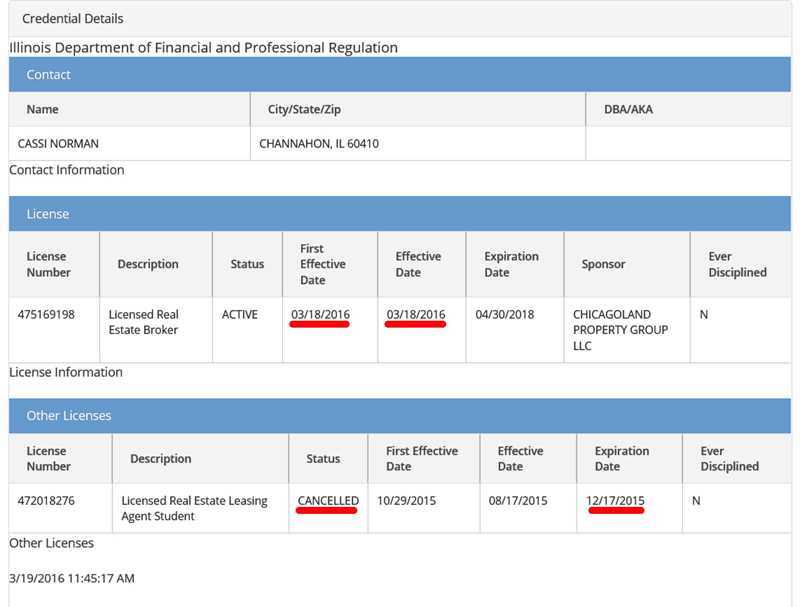 Six members of a single family hold real estate licenses affiliated with Chicagoland Property Group (“CPG”), a firm we’ve singled out as Craiglist’s worst apartment ad spammer based on its 1,000s of abusively repetitive ads at Craigslist. We’ve repeatedly referred to the family as the spam-family Walker, but now consider it more appropriate to call them the “scofflaw-family Walker.”

The outliers
The family has two outliers. Patriarch James Walker posted a single ad at Craigslist two years ago and hasn’t, to our knowledge, advertised since. We haven’t seen any ads from son-in-law Timothy Norman.

Ma Walker
Joi Walker is the mother of Collin and Kellen Walker and their sister Cassi (Walker) Norman. We first wrote about Joi’s scofflaw ads two years ago. Joi had 654 Craigslist ads online on March 11. All of those ads were removed the same day, following our post. A number of those ads were for properties that had not given CPG the written authorization to advertise required by the Illinois Real Estate License Act (the “Act”).

Joi Walker resumed posting Craigslist ads on March 17 and has 45 ads online as of this morning.

Kellen Walker
Collin Walker’s brother Kellen had 564 Craigslist ads online on March 12, many of them in violation of the Act’s requirement for written authorization. Fifty-five illegal Walker ads were removed following our post and he paused for several days before resuming posting. As of this morning, Kellen has 436 ads at Craigslist, some of which are illegal.

Cassi (Walker) Norman
Collin Walker’s sister Cassi Norman had 289 ads at Craigslist on March 13, some of which had originally been placed nearly a month earlier. At least 31 of those ads lacked the written authority to advertise that the Act requires. All 289 ads cycled off Craigslist over a matter of days, and there are currently no apartment ads containing the name Cassi Norman at Craigslist.

Our post noted that the IDFPR License Lookup database did not show Cassi Norman holding an active real estate license as of March 13. Her leasing agent student license had expired on December 17 of last year. Per the above screen cap, Cassi Norman was issued a broker license on March 18.

Engaging in activity which requires a real license without having one, or holding oneself out as being licensed without having a license, is a Class A misdemeanor under the Act. If the dates in the IDFPR database are accurate, Cassi Norman appears to have committed criminal violations.

We’ll be writing about more scofflaw CPG leasing agents in coming days, and continuing to monitor and document the online behavior of the scofflaw-family Walker and other CPG leasing agents. At some point we’ll present our documentation to IDFPR and ask for a determination of whether Collin Walker’s license should be suspended or revoked.